Facebook
Join us and impact the life of the poor, abandoned and forgotten. 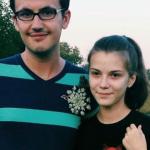 The main reason I went on this mission trip was because of my younger sister Jessica. We went to a spring mission conference and did some local missions work in Charlotte, North Carolina. This stirred a longing passion in my sister to do missionary work overseas. The Moldovan mission trip was coming up and we found out more about it from the Gwinnett Romanian Baptist Church. The decision was made for my younger sister, but I needed to tag along with her. Little did I know that this whole experience would change my life!

While in Moldova, the kid’s acceptance and love has left me with the greatest impression. I grew up seeing the kids in America with iPads, laptops, and cellphones. When I went to Moldova I saw how spoiled the kids in America are due to them buying and getting the latest gadgets. Over there I observed and saw that the kids were so grateful in the little things. I saw that a ball, a toy, anything given to them had the greatest value in their eyes. They also loved you and saw the attention you were giving them as the greatest thing that has ever happened to them.

While in Moldova I became friends with an orphaned young girl called Nastea. She told me she dreams of becoming a fashion designer and traveling the world. At one point I told her that I like drawing animation. She told me that she likes to draw animation as well. We both agreed to draw something and exchange it the following day. The next day, as if by chance, we bumped into each other and exchanged our drawings. She had a few drawings, and they were way better than mine. Coming back home from Moldova made me want to offer her the world, that’s how much I grew to love her. It made me think of how Jesus left all His glory and riches and came down to sinful miserable human beings and giving His life for us. I can’t wait to go again next year to Moldova, God willing!

Kingdom’s Kids Ministry is a non profit organization based in Atlanta, Georgia. This organization’s focus is primarily to show others the love of God through words and actions.